Since the election, the broader markets have consistently risen, setting new all-time highs day after day.  REITs were left out for much of this rally but finally began to participate this week.  It seems rising rates are not as alarming to investors when they are considered in the context of fiscal stimulus, inflation, and economic growth.

Fundamentally, the economic growth, if it actually happens, should translate to better FFO/share growth as acquisition opportunities become more numerous and tenants demand more space.  Inflation should raise the value of existing REIT inventories, largely canceling out the reduction in NAV from rising rates which often translates to rising cap rates.

Consistent with this macro viewpoint, cyclical hotel REITs are among the top performers.  Ashford Trust (AHT) and Sotherly Hotels (SOHO), holdings of 2CHYP, did quite well and we elected to sell the AHT at its appreciated price (although we were a bit early).

We view self-storage REITs as a stealth beneficiary of the rapidly changing macro environment as job growth could spur moving which often involves storage.  Extra Space (EXR) is a true blue-chip REIT with a freshly cheap market price, so we saw this as the ideal way to gain some exposure.

While healthcare is generally considered defensive and a-cyclical with respect to the macro economy, senior housing is driven by private pay.  When nest eggs become more valuable an increasing portion of seniors can afford to move into independent living facilities rather than living with their offspring.  We view this as a sustainable demand driver and with New Senior Investment (SNR) priced at such a low multiple, we entered into senior housing which had previously been absent in 2CHYP. 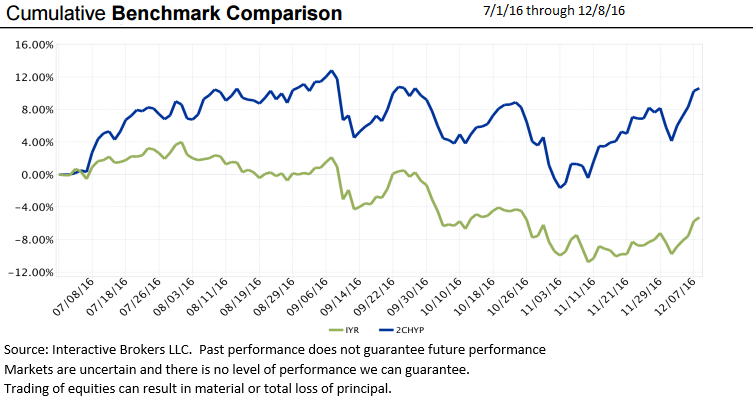