An immense amount of news hit this week so let’s get right to it.  First the bad then the good.

Omega Healthcare (OHI) reported with strong FFO numbers, but the headline was not the story.  FFO remained strong because OHI’s troubled tenants remain largely current.  Thus, the revenue came in, but it may not in the future.  As much as 10% of OHI’s tenants are having difficulties with EBITDAR coverages under 1.0X.  Omega is priced for struggling with a low P/FFO, but we will watch it with increased caution going forward.

Public Storage reported and depressed the entire self-storage sector with its commentary.  JCAP got lumped in and fell with the group.  I view this as the market getting it wrong as JCAP is benefitting from the oversupply that is hurting the sector.  JCAP is part of the oversupply due to its position as a developer.  Same store NOI figures are coming in as slow growth, but development spreads remain high.  We anticipate a bounce when JCAP reports.

Washington Prime had a reasonably good report, particularly relative to expectations in the retail space.  It soared as much as 7% up on Thursday, only to give it all back on Friday as retail sentiment returned to the dumpster.  This has been the story for almost 2 years now where the retail REITs put up reasonably good numbers but the market remains pessimistic.  At this point, the dividend yields are high enough that investors can afford to wait however long it takes for sentiment to return.  We would likely exit if fundamentals turn south, but so far that just hasn’t happened.

Felcor became opportunistic as RLJ’s price movement opened up an arbitrage.  We see about 5% upside to the close of the merger by the end of 2017.  Roughly 2% of this upside has already been realized in Felcor’s price by Friday’s close.

More earnings reports hit next week and we will continue to trade opportunistically as prices move disparately from fundamentals. 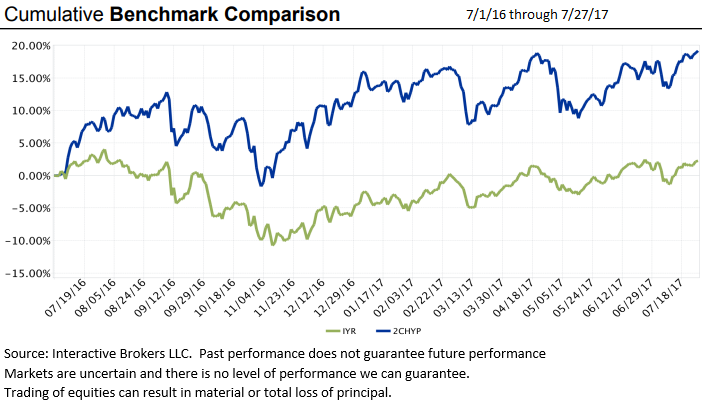