While I do not want to overly focus on CBL, I think it is likely to be on everyone’s mind given the price movement so I will start there.

We were unequivocally wrong on CBL.  I projected roughly flat NOI with stable FFO/share and the actual fundamentals came in with FFO of $0.52 which is 4 cents lower than 3Q16 and same store NOI down 2.6%.  Some of the decline in FFO was a result of asset dispositions and this portion was expected and perhaps even a part of a healthy transition to higher quality properties.  The rest of the decline, however, was due to negative organic growth which is a bit scarier.  Occupancy actually grew significantly sequentially, but renewal rates were cut double digits to keep strong tenants in place.

Clearly CBL was a bad holding, but a trickier question is what to do with it.  At this time, I believe a portion of the drop was fundamentally warranted, but much of it was related to the clientele effect.  Due to CBL’s high dividend yield, it was held by many who were in it for the dividend specifically.  These sorts of investors are more likely to sell when a dividend is cut.

At roughly $6 a share, CBL is trading at about 3X FFO run rate.  Not all of this FFO is accessible to shareholders as some of it needs to be allocated to redevelopments which will merely preserve revenue rather than increase it.  After accounting for capex and redevelopment spend, approximately $1 per share of FFO is available for common shareholders and this will be split between dividends at the new rate of $0.80 annually, and debt paydown which will improve the long run value of the company.

CBL is rather ugly, but at 3X nominal FFO and 6X FFO after capex adjustments, it remains a value.  We will continue to monitor the situation and will let you know if anything changes.

Unfortunately, the CBL drop has overshadowed the performance of other 2CHYP companies which have reported quite good fundamentals.

STAG had exceptional leasing activity in 3Q with double digit rollups and raised its dividend.

UMH illustrated the strong and still improving fundamentals of the manufactured housing space.

MPW knocked the cover off the ball with the emergence of Adeptus from bankruptcy.  Adeptus had been the single blemish on MPW’s portfolio and now that the new Adeptus has assumed the lease, MPW has escaped the tricky situation without a scratch.  MPW was paid full rent through the entire bankruptcy process and will continue to be paid full rent from the new company.

UNIT’s report was as expected.  We already knew from the Windstream prerelease that WIN is still current on rent to UNIT and UNIT merely restated this point.  I was encouraged, however, that CEO Kenny Gunderman adamantly rejected the idea of a lease renegotiation.  UNIT has the power to let the current lease run and has no incentive to change it.

JCAP announced a healthy pipeline of opportunities and discussed the soft landing of self-storage supply.  Preliminary 2018 guidance calls for over $3 per share of NAV accretion from development progression.  As a $20 stock, $3 per share is quite a bit.

IRM raised their dividend starting in December and grew AFFO 19% YoY in the 3rd quarter.

CTT’s 3rd quarter kept them on track to hit 2017 guidance.  There was minimal damage from hurricanes, but it interrupted customer purchase timing.  The forward outlook still remains strong.  Once again, CTT was able to realize higher stumpage prices than would be expected in their submarkets.

Geo Group, who we do now own, reported that the US government has increased spending for both BOP (Bureau of Prisons) and ICE (Immigrations and Customs Enforcement) which bodes well for CXW’s leasing in 2018.  We anticipate similar commentary on CXW’s call next week.

The rest of retail unfortunately fell victim to the fallout of CBL.  WPG dropped 11%, SPG dropped 3%, and KRG fell 3%.  I find these sympathy drops odd as all 3 already reported.  SPG’s and KRG’s reports were strongly positive with FFO and NOI growing.  WPG’s was slightly weak, but that had already been priced in.

We like where the portfolio is positioned overall with a mix of value and growth.  A majority of our companies performed in-line with expectations or better.  Unfortunately, the good news was dominated in magnitude by the bad news coming from CBL. 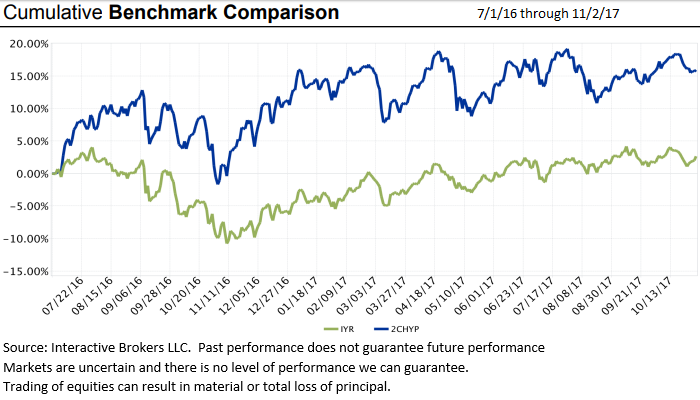