From a theoretical perspective, what should an investor look for in a stock?

Carefully selected REITs deliver on both fronts and the picture got better this week.

With the ten-year Treasury yield cresting 2.95%, it was a rough week for REITs in terms of market pricing.  This only amplifies the value proposition that is already present.  Fundamentals have also improved with glimpses into industrials and hotels.

Prologis reported earnings featuring a raise of guidance on the back of rental rate growth exceeding 20%.  US properties were even stronger with growth approaching 30% in some cases.  We find this to be the relevant number for our portfolio as STAG, GPT and PLYM are focused on US industrial properties.

I suspect the growth for STAG and PLYM will come in a bit lower than that of Prologis due to differences in submarkets, but still strongly positive.  GPT’s growth will be delayed by the contractual nature of its triple net leases.  However, its leases becoming below market bodes well for its long run growth.

PEB’s leak of stronger than expected Q1 performance has sent most hotel REITs up, even against the falling REIT market.  We took advantage of this favorable pricing with a sale of Hersha and recycling the proceeds into RLJ which had not risen with the rest.

I am writing this update from Wilmington, North Carolina, where I am checking out Sotherly Hotel’s reopening of the Hotel Ballast.  The renovation appears to be well executed in a way that will improve ADR and competitive positioning in the submarket.  Unfortunately, a competing product has freshly opened with an Embassy Suites just across the street and it is waterfront just like the Ballast.  Worse still, the Embassy Suites is a competing Hilton product, so it will steal a portion of the Hilton Honors guests that the Ballast has gotten in the past.

I believe SOHO has done well in adapting to the new competitive threat, but it will still be a net negative.  The ROIC on this $10mm renovation will, in my estimation, have a low realized rate of return, but that is measured against 2017.  If we measure it against what would have happened to the Ballast had it gone un-renovated with the Embassy Suites opening I think the upgrade was necessary.  Sometimes, bad things happen to hotels that are outside of the REIT’s control and all one can do is mount a response.

This competitive setback is only on one of SOHO’s hotels.  The rest of the portfolio looks great through 2018 and 2019 and we are anticipating a 1Q18 beat when SOHO reports.

Hotels and Industrials are significantly overweight in 2CHYP and both sectors are poised to benefit from macroeconomic strength.  Further, both sectors are resistant to rising interest rates with strong ability to adjust revenues. 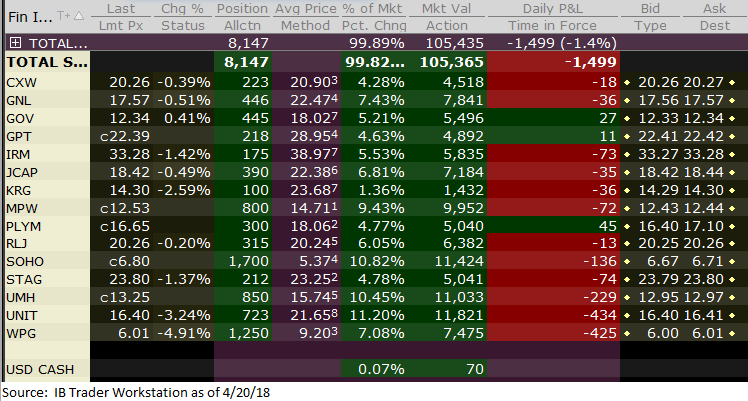 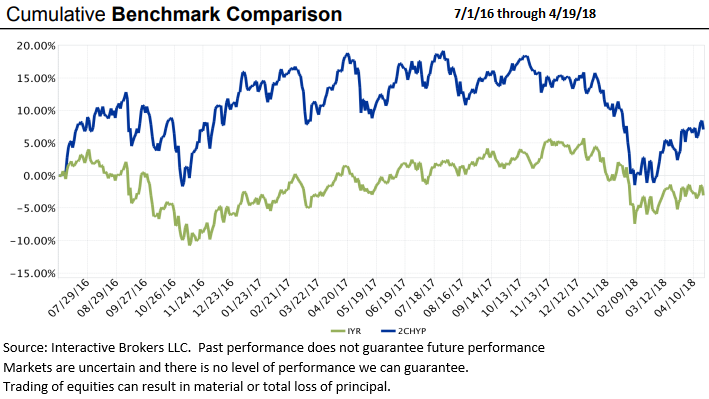