The highest upside, the riskiest and the chopping block

There was relatively less macro news to mull over this week, so I want to dedicate this post to instead talk about specific positions indicated by the title.

Generally, when our positions appreciate, we look to trim or sell as the gains will often take the market price up close to fair value.  However, we have not done this with Sotherly Hotels.  2CHYP’s average cost basis for SOHO is $5.37, yet even at $6.98 we have no desire to sell as the NAV is just so extreme.  Using a cap rate of 8% on SOHO’s NOI, it has an NAV of about $11.  Thus, even with the recent market price appreciation there is still a tremendous amount of upside.  I would even argue that an 8% cap rate is fairly conservative as the Georgian Terrace would likely go for a 6% cap rate and the freshly renovated DeSoto in Savannah would likely sell at a 7% cap rate.

The riskiest holding in 2CHYP is probably Plymouth Industrial.  While its fundamental leasing prospects continue to look strong, the recent attempted and redacted secondary offering has created an overhang that is destabilizing its market price.  PLYM’s CEO Jeff Witherell did the right thing in pulling the offering as it was looking like the issuance price would be as low as $15 a share.  However, the company still needs capital to grow so it will likely have to come out with an offering at some point in the near future.  Knowing this, people are reluctant to buy shares as they anticipate being able to get cheaper shares in the potentially upcoming secondary.  While this is an uncomfortable holding due to what is likely to be a period of extreme price volatility, we remain confident in the long term fundamental value of PLYM shares.

On the chopping block

STAG Industrial’s recent market price appreciation has taken it close to fair value.  As other opportunities open up, we would consider trimming or selling STAG to free up capital.

The other companies on the chopping block are still quite far below fair value, but we do not like the concentration of weak management teams.  As value investors we often have to make the tradeoff of accepting bad management in order to get the extreme value that comes along with it.  However, this is a tactic best used in small doses and 2CHYP presently holds 3 different REITs with less than ideal management:  ILPT, GOV and GNL.

Each company has great properties and no clear near-term fundamental risks, but we prefer working with REITs we can trust.  Fundamental analysis can go out the window if management decides to do something that destroys value.  Price action has been favorable on all 3 of these companies in recent weeks which is giving us a potential opportunity to sell. 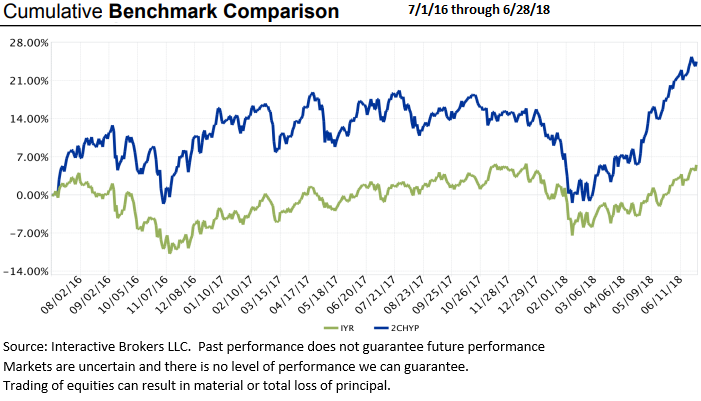