What is going on with Uniti?

As most of you know, Uniti has fallen by over 20% this week following a negative sell side report from Citi which said its fate was linked with Windstream’s (WIN).  In the same report, Citi put a $1.00 price target on WIN.  Generally, sell side reports do not hold this much weight as they have no bearing on fundamentals, but the timing of this report was such that there was already enhanced apprehension due to the upcoming trial.  On Monday, Aurelius and Windstream will be in court where they will potentially reach an outcome on the default claims alleged by Aurelius.

So what does this mean for UNIT’s intrinsic value?

Some of these steps are more likely than others, so let’s go over the probabilities.  As someone with no legal expertise, I cannot ascertain the probable outcome in court.  In my layman’s opinion, it seems unlikely that the court would rule in favor of Aurelius as the bondholders generally do not seem to want a forced default.  Additionally, the action that caused the supposed infraction was reviewed and approved by reputable third parties.

I think it is almost certain that a forced default of the bonds would lead to a bankruptcy filing.  If a bankruptcy were to occur, the Uniti lease could come under review.  As it is a master lease with a fixed term, the parties that take over WIN would not be able to revise or partially accept the lease.  It would have to be accepted or rejected in full.

Since WIN remains significantly positive in operating cashflow on the businesses that are inextricably tied to the use of UNIT’s assets, I think it is likely that the lease would be accepted in its current form.  This would lead to UNIT’s revenues being uninterrupted and its new tenant would likely have better credit than WIN.  We have seen a similar process play out with CorEnergy as its leases survived through the bankruptcy of tenants.

In the event that the lease is rejected, UNIT would lose a large portion of its revenue and would need to find a new tenant or tenants for the associated assets.  There are varying opinions on the matter, but our analysis suggests the WIN lease is moderately above a market rate.  I suspect that a market rate would be somewhere between 60% and 80% of the current rental rate, implying that UNIT would take a hit of 20% to 40% of the related revenues.

Clearly such an outcome would be detrimental to UNIT’s intrinsic value.  Thus, in holding UNIT we are making a bet that the scenario weighted average outcome is worth more than its current market price.

If all is well regarding the WIN situation, UNIT is worth somewhere in the high $30 range.  Given the probability we currently assign to this outcome, we are willing to hold UNIT in 2CHYP as part of a diversified portfolio. Multiple things would have to go wrong, each of which seems independently unlikely.

Clearly we could be wrong here and this is a high risk position, but I believe it is a calculated risk in which we will on average come out ahead. 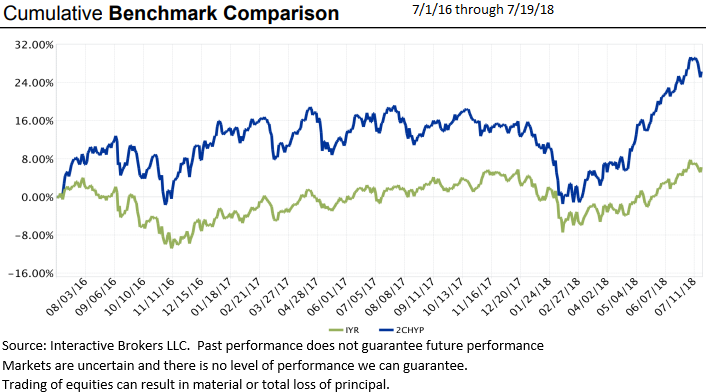