A number of the companies in 2CHYP reported 2nd quarter earnings this week.  Our thoughts are below

Hersha was added to the portfolio as a result of strong earnings which featured a sizable guidance increase.  Much of wall street was critical of the HT report as its FFO beat was largely the result of insurance reimbursement related to hurricane damage, but this merely masked the underlying operational strength.  NYC and southern Florida both had excellent results which led to an increase in RevPAR guidance for HT’s whole portfolio.  We saw the selloff as misguided and used to it pick up some cheap shares.

Iron Mountain’s earnings call revealed that they are coming in toward the high end of AFFO guidance.  In previous reports, IRM claimed they could raise rental rates with minimal disruption and this was the first quarter in which they got to prove that concept.  Rates were raised as stated and volumes remained steady which led to healthy NOI growth.  Despite the strength of the report, IRM got caught up in a broad REIT selloff and sold down significantly today.

Sotherly Hotels has not yet reported 2Q earnings, but it did raise its dividend for the 18th time since the second quarter of 2012.  It has a 34% dividend CAGR over this time period and still maintains a fairly conservative payout ratio.

Core Civic has not reported 2Q earnings yet either, but it announced a new contract for its Arizona facility which should improve occupancy and positively impact FFO/share.  Reportedly, ICE will be bringing in 1000 detainees with potentially more from the US Marshalls.

Washington Prime’s earnings demonstrated stability and could be a positive inflection point as its tier 1 and open air portfolios actually had positive same store NOI growth.  There was still some weakness in tier 2 assets which took down the overall numbers.  WPG maintained its former outlook which seemed to be better than market expectations given the positive price move on the report and the low multiple at which it trades.

Farmland Partners is likely to benefit from the recent trade discussions with the EU in which Europe will be purchasing Soybeans.  There has also been discussion of a relief package aimed at farmers negatively impacted by tariffs.

It was a fairly rough week overall in terms of pricing as strong macroeconomic data led the market to suspect more interest rate hikes from the fed.  However, the fundamentals of the REITs we own looked rather strong with mostly positive earnings surprises. 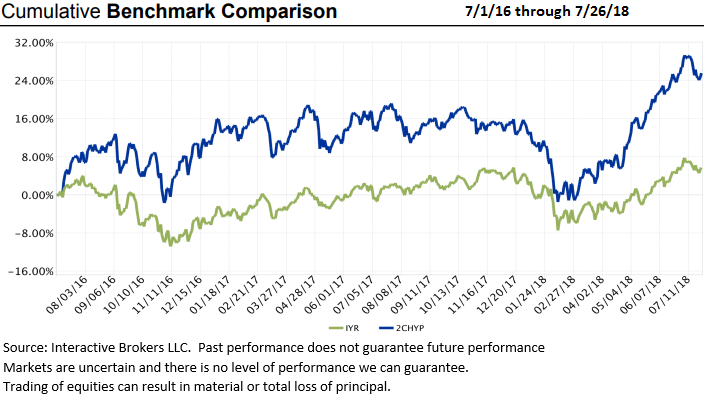