Multiple 2CHYP companies reported earnings this week with our take on the news below:

CatchMark Timber had a particularly strong quarter with price realizations well ahead of the southwide averages.  CTT’s distribution relationships continue to be beneficial in this regard.  The favorable performance thus far in 2018 along with what management is seeing going forward allowed CTT to raise EBITDA guidance substantially.

GOV reported the best quarter I have seen from them in a long time with same store NOI improving dramatically and FFO coming in well above my expectations.  Its favorable fundamental news was overshadowed, however, by talk of a dividend cut in 2019 on the earnings conference call.  It has been known for a long time that GOV’s dividend was not covered by AFFO, so the market actually responded positively and traded GOV up despite the dividend cut talk.  We may look to exit this position in the coming weeks.

Jernigan Capital has consistently reported strong earnings and this quarter was no exception.  Most of JCAP’s earnings come from amortization of the value created in its developments which makes its earnings figure somewhat nebulous.  Importantly, JCAP had some concrete data to go along with this which demonstrated to the market that the earnings are not just smoke and mirrors.  Specifically, pre-leasing is well above underwriting.  JCAP traded up substantially on its earnings and the related conference call.

Medical Properties Trust had a solid and somewhat in-line quarter.  They continue to demonstrate a superior ability to handle the challenging healthcare environment by replacing weaker tenants without losing revenue.  Its recent dispositions generated sizable gains on sale and may serve to demonstrate the value of its portfolio.  I suspect further dispositions could cause MPW to trade at a lower implied cap rate.

STAG has consistently had favorable leasing spreads in prior quarters, but it never really translated into same store NOI growth as minor drops in occupancy dominated the equation.  Now that STAG has a more mature portfolio, it was able to turn same store NOI positive this quarter which indicates that FFO now has an organic growth component to supplement the acquisition growth.  Retention over 80% was significantly above expectations, indicating that its properties are in demand.

Overall, it was a good week for the fundamentals underlying 2CHYP’s companies.  Some of the reports have not yet shown up in market pricing as earnings were overshadowed by movements in the 10 year treasury yield which seemed to dominate REIT market prices this week. 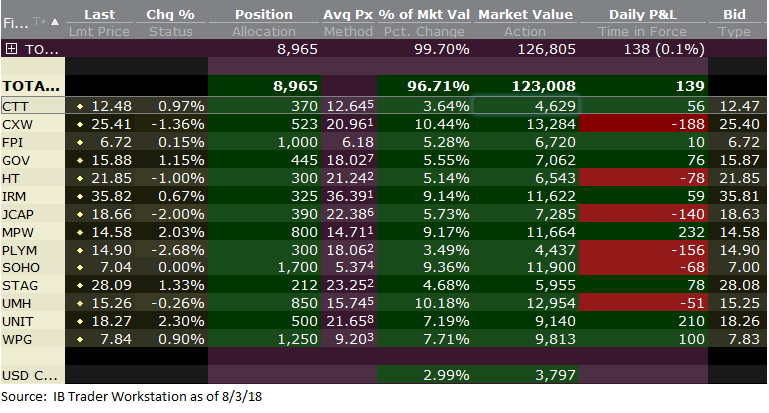 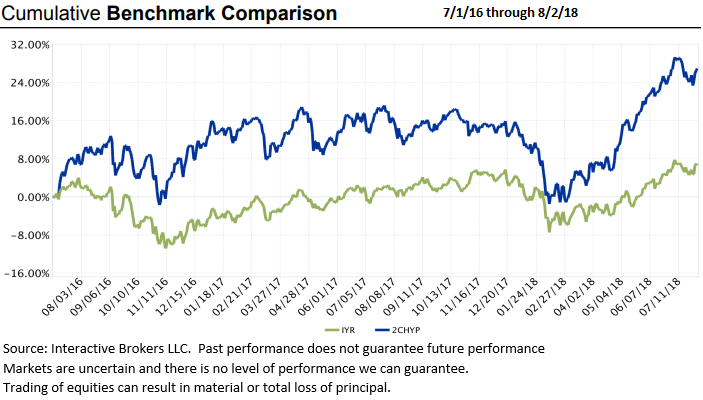