Its that time of year where the stocks that are already beaten down drop even further as shareholders sell to take a tax loss with which they can wash gains thereby reducing their tax bill.  Tax loss selling is unusual in that it is a rational behavior that causes irrational pricing.

Likely victims of tax loss selling have been the retail REITs, FPI, CTT, IRM and some of the hotel REITs that had large price volatility.  IRM is possibly one of the biggest tax loss sale REITs as it had an equity raise which issued nearly 17mm shares at $37.  Those who held since this raise may now be selling to take the loss.

Tax loss sales are not on a specific day, but rather are typically spread through the last couple months of each year.  Consequently, the buying back in is also spread over the first few months of the following year as those who sold must wait at least 31 days to prevent a wash sale.  Those who executed their tax loss selling early in November could even get back in before the end of the year.

The continuous flow nature of tax loss selling at an aggregate level causes it to not spike security prices down, but rather to be a continuous drag on the stock prices.  Similarly, the buying back in after the 31 day wait is not likely to spike prices up, but rather will be a tailwind for a couple months.

Thus, I am anticipating some of our beaten down REITs to remain weak for a couple more weeks but then recover in early 2019.  I will be looking to get back into FPI and possibly even CTT if it gets cheap enough.

After a Hawkish start to its tenure, Powell’s Fed seems to be softening its tone which is being interpreted as 1 hike in December and 1 in 2019.  With potentially only 2 hikes left, this cycle of rising rates may be coming to a close which could finally put an end to the harbingers calling for REIT doomsday.  While I still maintain that REITs are fundamentally resilient in a rising rate environment, the more dovish Fed tone is likely to be good for market sentiment regarding REITs. 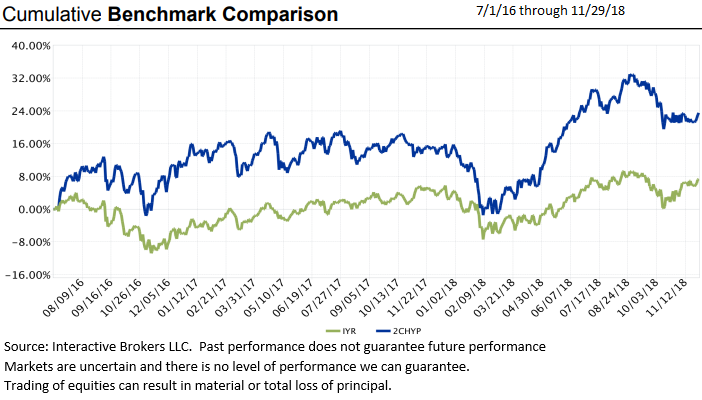