Prologis kicked off earnings season this week with a mixed report.  Their 4Q18 was quite strong with continued same store NOI growth, but 2019 guidance came in a bit light relative to what analysts were anticipating.  Even with the lighter guidance, growth is still projected at a healthy pace for the industrial REIT space.  Importantly, the US industrial growth is outpacing global industrial growth rates which bodes well for the more domestically focused industrial REITs in which 2CHYP invests (PLYM and GOOD).

Next week will be the first glimpse of retail REIT numbers with reports from Kimco and Simon Properties.  So far, the macro reports we have seen showed strong sales growth this holiday season which usually leads to a strong sales quarter.  Less clear is whether the strong sales will translate into rent/occupancy growth or whether the landlords will remain lenient.  Kimco’s report is directly relevant as it is in the 2CHYP portfolio while SPG will serve as a bellwether for WPG and CBL-E.

I think REITs are better positioned this earnings season than in the rest of 2018 because of how much S&P earnings expectations have come down.  REITs have been steady growers for years and the market has not been impressed because broader market stocks were growing the bottom line double digits thanks to the direct impact of tax cuts.  While the 4th quarter may still show strong growth for the S&P, forward guidance is likely to call for minimal growth.  This will make the steady moderate growth of REITs look good in comparison. In other words, I project that REITs will keep chugging along as they have been, but now the bar is much lower.

We are anticipating substantial rhetoric on earnings calls about the government shutdown, but it is unclear at this point how much impact it will have.  The most harmed are likely DC area hotels as the lobbying tends to slow down during shutdowns.  Given the intended re-opening of the government announced today, I would doubt that overall 2019 guidance will not be affected all that much.

Earnings season usually brings opportunity as the market reacts and over-reacts to reports.  We are happy to have a roughly 4% cash position so as to be ready for whatever comes up. 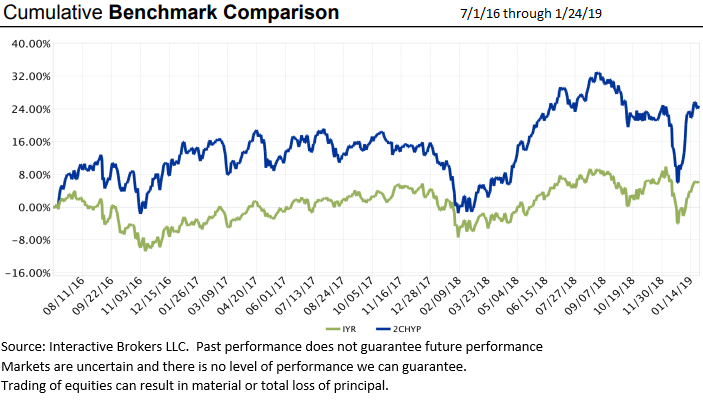