Simon Properties (SPG) reported earnings this morning that were roughly in-line with consensus.  It usually serves as a bellwether for other mall REITs as David Simon habitually provides industry commentary on the call.  This quarter, his commentary was mixed in that he thought sales looked strong and demand for mall space was healthy, but that we would continue to see bankruptcies of retailers.  His take was that this wave of retailer bankruptcies would be due to them being overleveraged rather than macro retail weakness.  This bodes well for the ability of mall REITs to replace tenants, but it could mean yet another wave of capex.  Washington Prime (WPG) has relatively less exposure to troubled retailers than its B-mall peers so I continue to anticipate it breaking away from the crowd.

An unexpectedly strong jobs report sent REITs tumbling in typical fashion.  Despite REITs benefitting from the macroeconomic environment, some are worried that the jobs number could cause the Fed to rethink its recent dovish turn.  In my view it is rather simple:  A strong economy is good for REITs so any dip on positive economic news is a buying opportunity.

Medical Properties Trust (MPW) announced an $859mm purchase of an Australian hospital portfolio with a roughly 20 year leaseback.  Due to recent dispositions and a sizable line of credit, MPW has enough cash on hand to make this purchase without an equity issuance, but any future purchases are likely to be funded with equity.  In anticipation of an upcoming equity raise, the market has sold MPW down a bit on this news.  We are unable to assess whether the acquisition is accretive as cashflow information was not announced.

January was a great month for 2CHYP.  We look forward to what February will bring. 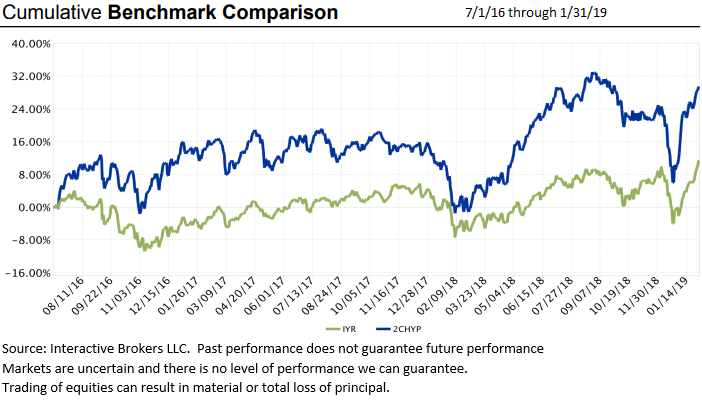