With the sale of CIO and WY this week, 2CHYP has some cash to work with.  We already have several prospects in the pipeline that we would like to get.

FPI has dipped significantly since we sold it.  The macro environment for farmland remains tough and I am anticipating a rough quarter in terms of the AFFO line.  Over the long run these are great assets.  The U.S. has the most productive farmland in the world and FPI owns some of the best U.S. farmland.  However, FPI has a bit of seasonality to its earnings with virtually all of the AFFO coming in the 4th quarter.  This seasonality is not a problem fundamentally, but the market has not fully caught on yet and I think the seasonally driven weakness in 2Q may facilitate a better entry point to buy.

Retail in general had a challenging 2nd quarter as the bankruptcies which have been known about for a long time took their financial toll in 2Q in terms of same store NOI and FFO.  WPG managed to move up on its earnings announcement despite very weak same store NOI because they successfully conveyed the timing aspect.  Their maintenance of positive 2% or better NOI guidance for 2020 opened the market’s collective eyes to the idea that 2Q19 may be the trough for retail and things look better going forward.

PEI has fallen just about as hard as the rest of the “low end” mall REITs, but it is further along in the transition to A or nearly A malls.  We see substantial upside in shares.

Office is having a good quarter kicked off by SLG’s impressing leasing spreads.  Brandywine is well positioned to capitalize with their developments making a timely delivery.

We see FPI-B as a great trading stock that produces nice income while held.  It seems to bounce around in the $23 to $24 range and if it gets back toward the lower end we would be happy to scoop it back up.  Unlike other preferreds, FPI-B has a growing liquidation preference which now sits at roughly $25.50.

End of June, 2019 2CHYP Performance since inception:  Note, Interactive Brokers cannot graph periods longer than 3 years at daily intervals so we switched to monthly data so as to continue reporting since inception.  July data will be posted as soon as IB has it available. 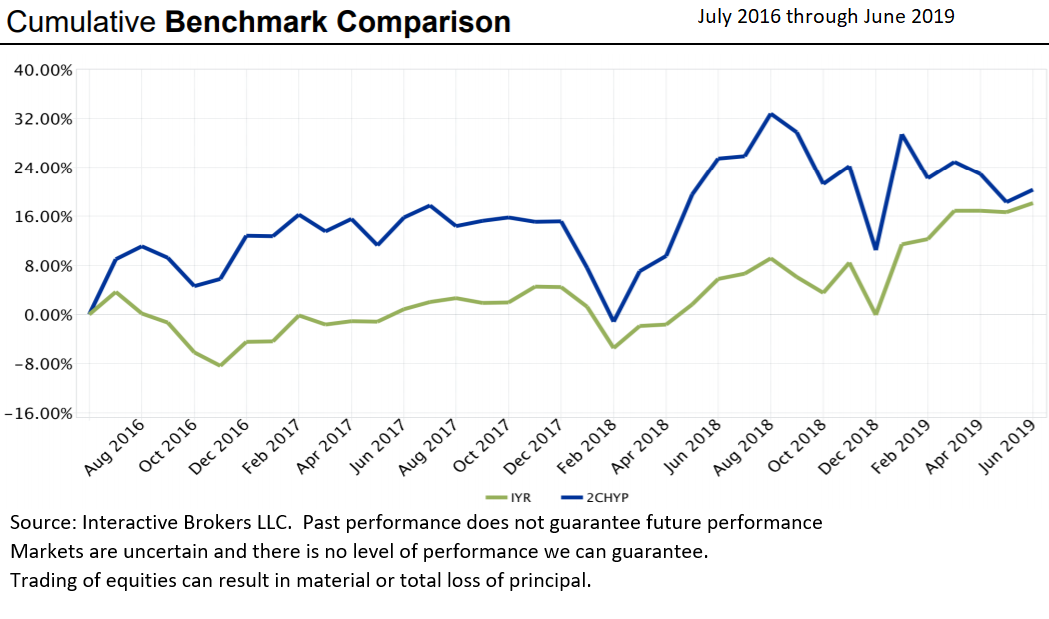 2CHYP Weekly Trade Confirmation Report:  In addition to the below, we sold WY.  See e-mailed trade alert for details.