Phase 1 of the trade deal with China seems to be underway.  The full details are not released, but snippets and sound bites from Trump and China seem to indicate a minor rolling back of tariffs in exchange for ramped up agricultural purchases.  Trump stated $50B of ag purchases but it is unknown whether that is a goal or an enforceable minimum.  Among REITs, this most impacts FPI and LAND and is clearly a good thing if ag exports get ramped up.  Some also view the rollback of tariffs as a positive for retailers and therefore the retail REITs indirectly.

The Fed has increased its focus on getting inflation to their 2% target and seems to have taken the possibility of rate hikes largely off the table.  It is also providing a form of QE to support the repo market.  Given that Powell had previously stated trade uncertainty as a dovish force, I suspect rate cuts are also quite unlikely.  Unless there are macroeconomic changes it looks like there will be a long period of stable Fed Funds rates.  I welcome this stability as it will allow REITs to trade on their own merits with fewer distractions.

GMRE took a sharp dip from over $14 to under $13 on a recent share issuance.  While the price shock is unfortunate in the near term, it may be a good time to load up as the issuance will likely be accretive.  Quite simply, their cost of capital is well below the cap rates at which they are acquiring.  This allows them to get bigger and diversify while growing the bottom line on a per share basis.  The market is recognizing this virtuous cycle which is likely why GMRE is up so much year to date.  The issuance of a significant chunk of shares temporarily increases supply of shares which is temporarily holding the price down.

2CHYP already has a 10% concentration in GMRE so I cannot really buy more but in accounts with lower exposure I did some buying.

A subscriber asked some questions about some REITs and given that these are impactful issues related to stocks in 2CHYP, I believe many will find the discussion to be of interest.  The questions are below:

The date of assumption or rejection of the lease has been moved back about a month from its previously scheduled Dec 6th deadline.  We view this as a positive because that is another month of full rent that UNIT will receive.  In recent days, WIN’s dependence on UNIT’s network was further increased as it signed a contract for major data backhaul in the amount of 5.7 Terabits making it the biggest capacity deal in WIN’s history.  The revenues from this contract will help WIN’s stability and the obvious dependence of this contract on UNIT’s fiber further obliges WIN to assume the lease.

As of 12/4/19 Exeter Capital (Michael Ashner) had raised its stake in CBL slightly to 6.54%.  As far as I know, there is nothing prohibiting him from walking away, but the increased stake indicates he is as intent as ever at turning the company around.

MPW has had a couple price dips lately despite its strong YTD performance.  In early November the dip was related to a share issuance and the dip of the past few days seems to be interest rate driven.  MPW has long term contractual revenues, so it is viewed as having high duration in bond speak.  Thus, it is considered to be more sensitive to rising interest rates.

Fundamentally, we have not seen anything that indicates these dips are more than temporary and I continue to view MPW as one of our stronger holdings. 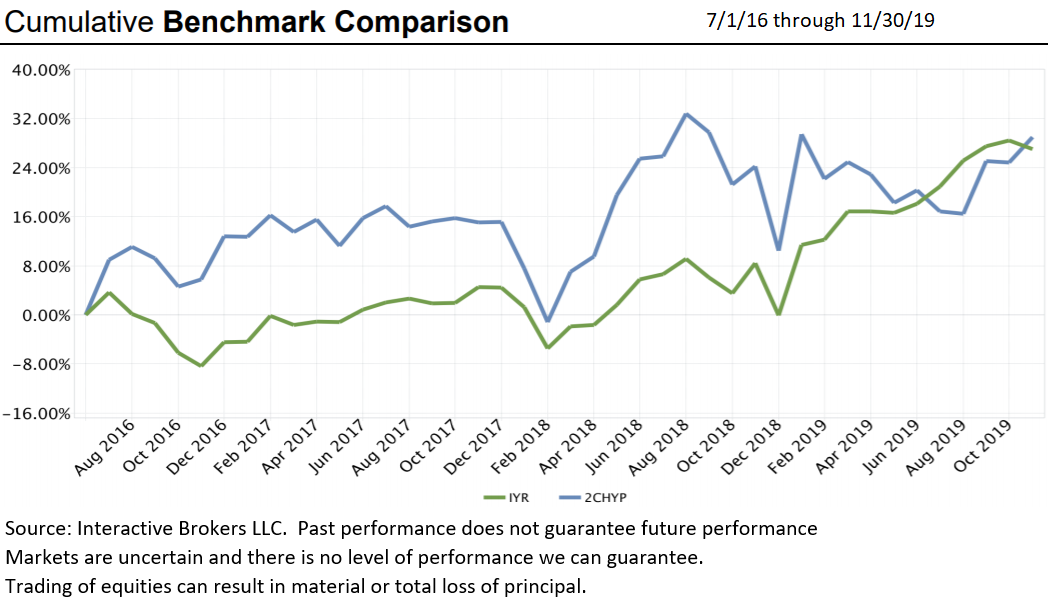