2CHYP consists of a mixture of home-run attempts and those that consistently hit singles and doubles.  Admittedly, our more ambitious stocks have not been doing well lately with deep value retail continuing its selloff and other stocks like SOHO and UNIT trading down lately.

Fortunately, the more stable stocks have collectively done well.  I consider STAG, GNL, GOOD, GPT, IRM and MPW to be the foundation of the portfolio.  These stocks do not have as much upside as our more ambitious names, but the fundamentals are rock solid.  This basket’s strong performance has held 2CHYP fairly steady as the ambitious names faltered.  It gives us the ability to wait for the falling stocks to rebound such that we can consider their potential in a calculated way and without panic.

Recent fundamental news has given us reason to remain hopeful that a rebound is in sight.

For the week ended September 2nd, Houston hotels grew RevPAR by 29.8%.  This should be hugely beneficial to SOHO’s Whitehall in Houston as the area’s hotels take in displaced residents and government officials who flew in to help.  Perhaps a similar boon will occur for SOHO’s Florida hotels in the aftermath of Irma.  Another top performing hotel region was Atlanta, with average daily rates up 9.3%.  These 3 areas together make up the bulk of SOHO’s portfolio, so if Irma does not damage SOHO’s properties, we anticipate a strong 3rd quarter performance.

Windstream, UNIT’s top tenant, announced that it was expanding its network through 2 more business dealings with CoreSite.  Along with a series of other sizable new customers, we are finding it increasingly likely that WIN will not just survive, but excel.  Further, WIN does not have any major debt maturities until 2020 so its new opportunities will have plenty of time to take root.

Among the strong foundational stocks, we are considering trimming STAG, GOOD or IRM as the favorable market pricing is taking them to near fair value.  If we see opportunity in the coming days, these could prove to be a good source of capital. 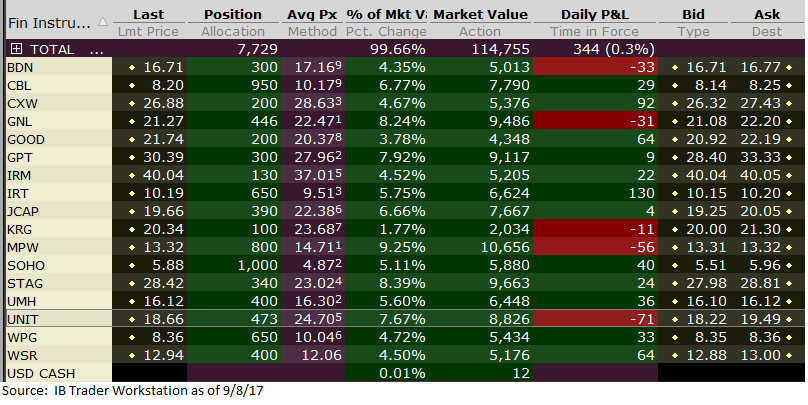 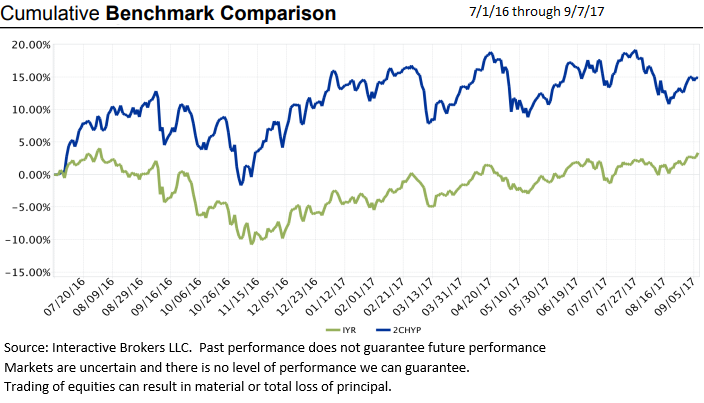