Interest Rates on the Ascent

This past week’s release of the minutes from the Fed’s March 15-16 meeting confirmed that inflation is no longer perceived as transitory and efforts to bring inflation down quickly have moved to front and center.  After March’s 25 basis point hike, investors now anticipate 50 basis point increases at each Fed meeting in May and June.

Bond markets have responded with sustained selloffs and 10y US Treasury yields have jumped from 1.52% at the start of the year to 2.72% at Friday’s close. The rates on new mortgages have climbed even faster, with the average rate on new 30-year fixed exceeding 5% this past week. 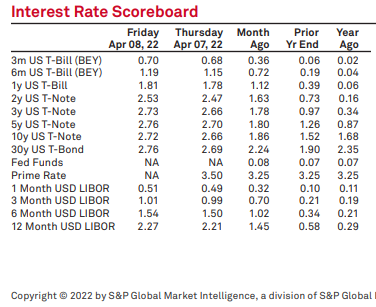 With an estimated 5 to 8 additional interest rate increases expected in the next 18 months, what is an income investor to do?

While a 3% 10y T-Note issued by a credit worthy US government will pay contractual income, inflation will slowly erode its face value purchasing power at maturity and high inflation in the interim will reduce its market trading price. Well structured triple net real estate addresses this problem with contractual annual rent increases on long term leases. The contractually rising income works to preserve purchasing power and the inflation adjusted value of the underlying property.

VICI: VICI Properties owns one of the world’s largest hospitality, gaming, and entertainment property portfolios. Its leases, with average remaining term of 43 years, carry contractual 1.8% annual rent escalators and 97% are subject to a CPI escalator.  (2MC portfolios own MGP, which is being acquired by VICI, but is available at an arbitrage discounted price)

MPW: Medical Properties Trust owns 438 net leased hospitals and healthcare facilities in North America, UK, Europe, Australia, and South America.  MPW’s leases all carry annual rent hikes, with 90% of leases tied to a CPI escalator with an annual ceiling of 4.5%. MPW has passed these rent hikes on to shareholders by raising its dividend for each of the last 9 years.

WPC: WP Carey owns more than 1,300 industrial, office, and retail properties net leased to credit tenants across North America and Europe. All leases have rent escalators, with 59% specifically tied to CPI.  WPC has raised its dividend every year since its 1998 NSYE listing.

Articles are provided for informational purposes only. They are not recommendations to buy or sell any security and are strictly the opinion of the writer. The information contained in these articles is impersonal and not tailored to the investment needs of any particular person. It does not constitute a recommendation that any particular security or strategy is suitable for a specific person.

Investing in publicly held securities is speculative and involves risk, including the possible loss of principal. The reader must determine whether any investment is suitable and accepts responsibility for their investment decisions.

Commentary may contain forward-looking statements that are by definition uncertain. Actual results may differ materially from our forecasts or estimations, and 2MCAC and its affiliates cannot be held liable for the use of and reliance upon the opinions, estimates, forecasts, and findings in this article.

Past performance does not guarantee future results. Investing in publicly held securities is speculative and involves risk, including the possible loss of principal. Historical returns should not be used as the primary basis for investment decisions. Although the statements of fact and data in this report have been obtained from sources believed to be reliable, 2MCAC does not guarantee their accuracy and assumes no liability or responsibility for any omissions/errors.

We routinely own and trade the same securities purchased or sold for advisory clients of 2MCAC. This circumstance is communicated to clients on an ongoing basis. As fiduciaries, we prioritize our clients’ interests above those of our corporate and personal accounts to avoid conflict and adverse selection in trading these commonly held interests.

Hypertext links to other sites are provided strictly as a courtesy. When you link to any of the sites provided on our website, you are leaving this website. We make no representation as to the completeness or accuracy of information provided on these websites. Nor is the company liable for any direct or indirect technical or system issues or any consequences arising out of your access to or your use of third-party technologies, websites, information, and programs made available through this website. When you access one of these websites, you are leaving our website and assume total responsibility and risk for your use of the websites to which you are linking.